If two sets have no simultaneous objects, they are said to be disjoint sets.

Sometimes it is helpful to visualize sets to get the big picture. To do that we implement Venn Diagrams.

In the picture above, blue-purple area represents the intersection of A and B.

Union is similar to intersection. With a small difference. When we want to represent the union of A and B, we take all the elements that appear in at least on of the sets. It does not include the duplicates. It is denoted by the symbol ∪. In fancy symbols, we define it as the following: A∪Bis{e∣ e∈A∨e∈B} 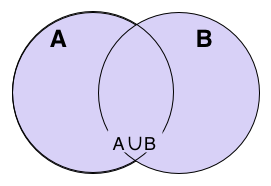 Symmetric difference of A and B is a collection of objects that appear only in A or B. If an element is present in both sets, it cannot be a part of symmetric difference set. The special symbol to denote it is: ⊕. A⊕B={x∣ x∈A⊕x∈B}

Since 2 and 3 appear in both sets above, they are not in the symmetric difference set.

The complement of B relative to A, written as A−B (not B−A), is the set of elements that are present in set A and not in set B. A−B={x∣x∈A∧x∉B} For example,